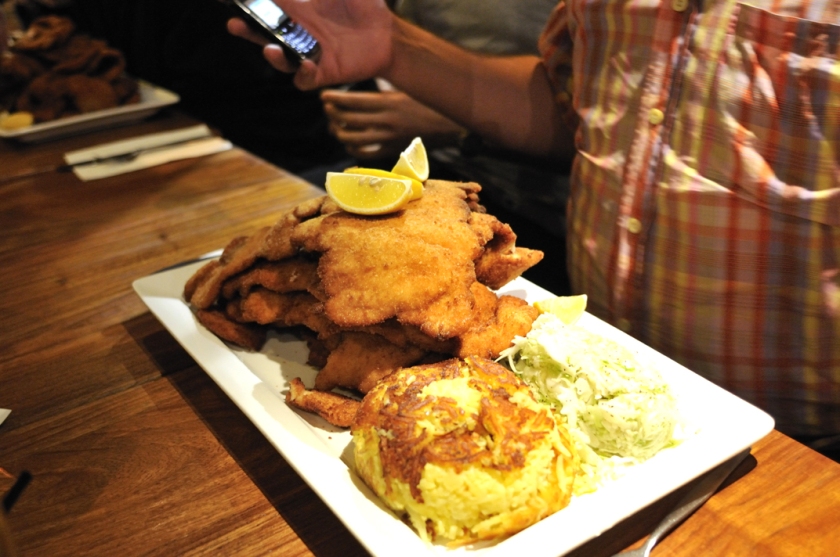 There are many people who say there’s a time and place for fried food. And there’s the rest of us who exclaim “anytime and anyplace!”. For those in the latter category, a trip to Essen, a restaurant specialising in northern European cuisine, is a must. It’s located on Broadway close to Sydney’s CBD.

My love of this kind of food started in the early 1970s with regular visits to Una’s in Kings Cross. Una’s has always been dependable; great breakfasts and especially great schnitzels including the jaeger schnitzel (with mushroom sauce). When original owner Maggie sold out (and later opened a namesake operation just across from the El Alamein Fountain), the new owners branched out with a couple of satellite Una’s. One was on Broadway, sandwiched between the University of Sydney and UTS. That was seven years ago; a couple of years later, the partnership that took over Una’s split and this branch became Essen.

It’s been as dependable as the original Una’s; great jaeger schnitzel (in a choice of pork, veal or chicken) and superb slow-roasted pork knuckle with bread dumpling and sauerkraut. Essen is also notable for its excellent beers and ciders including a malty dark Dreher Bak beer from Budapest (a brewery better known for its export Pilsner Urquell). Essen on Broadway is especially good for those of us for whom Kings Cross has lost its charm.

As an aside, it’s worth mentioning that Essen’s schnitzels are comparable to my all-time favourite, the legendary Figlmüller in Vienna, Austria. It’s here that the humble wiener schnitzel has been elevated to an art form. Figlmüller opened on Wollzeile, a short walk from St Stephen’s Cathedral, in 1905. I’d often reflect on the famous (and infamous) personalities who may have found their fried version of heaven within these walls – Freud (who undoubtedly would have suggested that a schnitzel is sometimes just a schnitzel); an unsuccessful painter of watercolours who just missed out on being named Schicklgruber; and Orson Welles, legendary lover of food in prodigious amounts who filmed The Third Man in the streets nearby

Figlmüller’s claim to eternal fame lies in a single piece of pork tenderloin, pounded into wafer-thin submission, crumbed and fried. At around 30cm in diameter, it smothers the plate on which it is served. It was always the first place I’d eat whenever I arrived in Vienna and the memories stay with me today.

When it comes to food, as with so many things, I claim observance to Dirty Harry’s creed that “a man’s just gotta know his limitations” and so it was at a recent media launch for Essen’s Schnitzilla challenge. I was on hand to watch a bunch of overly-ambitious journalists and media types attempt something no-one else had been able to achieve – defeating a man-made mountain of schnitzel.

The Schnitzilla is Essen’s newest menu item. Inspired by the Man v. Food television program, it encompasses a 3.5kg platter of chicken schnitzel, side dishes such as roesti and cabbage salad, and jaeger sauce. The idea is that if the dish is consumed within 45 minutes, the diner gets a limited-edition “I Got Schnit-Faced At Essen” T-shirt (presumably Size XXXL).

In the first month of the Schnitzilla, 70 diners tried but none reached the goal; the best performance was leaving 1.2kg. They get to take the leftovers home, where they will undoubtedly be recreating their challenge for the next few days.

There were more than enough contenders at the media launch. They took their places, their optimism as bright and eager as little bunny rabbits. But the Schnitzilla was the headlights on the highway. All were flattened by the juggernaut of fried meat. The best performing diner left 1.39kg.

Human nature is such that we always believe we can conquer the impossible, tackling Everest or visiting Ikea on weekends being the most notable examples. So the Schnitzilla will continue to seduce thrill-seekers but it appears unlikely any will ever succeed.

On the other hand, the Schnitzilla –  at $49 – can be seen as outstanding value. It roughly equates to about four or five servings so do your best but don’t overdo it; the leftovers will feed a large family or 27 Russian supermodels.