There’s a reasonably well-known Monty Python sketch in which Pope Alexander IV critiques Michelangelo’s The Last Supper (OK, OK, yes, we know, but that’s how British comedy occasionally rolls). While a complete outline is unnecessary, sufficient to say the Pope is somewhat peeved that the finished work has three Christs (two thin and one fat), 28 disciples and a kangaroo. It ends with an exasperated Pope exclaiming, “Look, I’m the bloody Pope! I may not know much about art but I know what I like.”

I may not know much about art. But I know what I like.

I get that. Because, like most people, I know fuck all about art but I know what I like.

Regrettably (because not only does it date me horribly but places me at the very outer limits of contemporary art’s target market), part of what I appreciate is that it requires a certain level of skill. I like to look at something I know I couldn’t do myself. Something that requires talent and hard work and dedication.

It’s an old-fashioned conceit, to be sure, in this Age of Inclusiveness. Where anybody can be an artist. Where all you have to do is declare yourself an artist and, voila, an artist you become. And, in very many cases, be very well rewarded for it.

In my travels, I’ve been lucky enough to spend a lot of time in art galleries, checking out my favourite artists. I’ve seen monumental works by Dali across the world, from Madrid to Yokohama, Klimt and Schiele in Vienna, Francis Bacon and Lucien Freud at the Tate Britain, Jackson Pollock as far afield as Canberra and Venice, Botticelli’s Birth Of Venus at the Uffizi, and, without fail, whenever I was in Chicago, there had to be a stop at the Art Institute for Edward Hopper and Nighthawks. There were even times I grew to appreciate an artist by seeing their works in the flesh (so to speak), the best example being Van Gogh from viewing his works in the Hermitage.

Not surprisingly, I’m a great believer in the traditions of a formal art education, the apprenticeship system that started out with the Guilds of the Middle Ages into the Renaissance, that evolved into the Academies and continue in some shape or form to the present day at the conservative end of the art spectrum.

Hundreds of years ago, young artists would learn their craft from the ground up, literally from sweeping the stone floors of their masters’ studios, along with a range of ancillary skills such as grinding pigments and priming panels. If they showed promise, there were years rigorously developing their draughtsmanship skills by copying the works of established artists; Michelangelo, for example, spent much of his youth in Florentine churches, slavishly imitating Giotto. 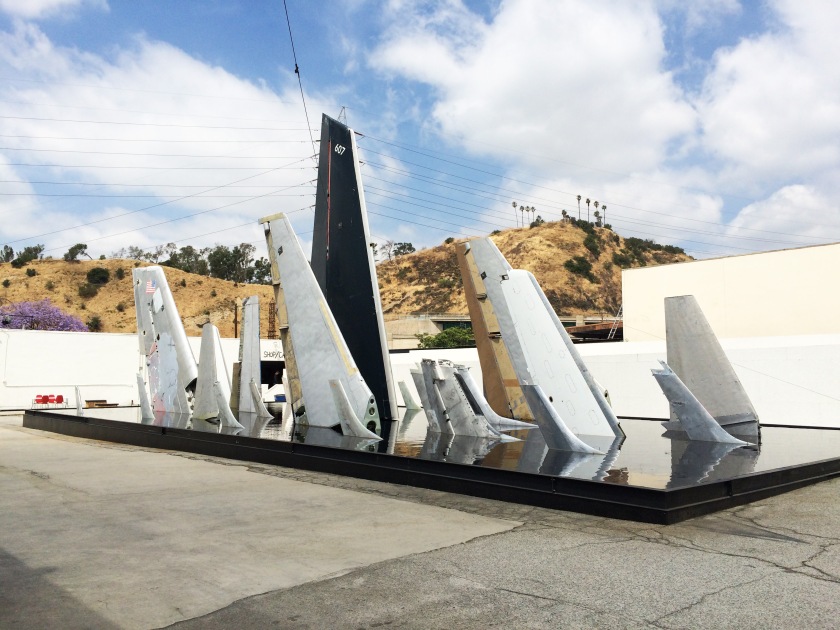 The last two hundred years has been marked by a rolling tide of rebellions against such tradition. Pre-Raphaelite, Art Nouveau, Dada, Surrealism, Abstract Expressionism, Pop Art. Just a sampling of the movements that railed against what had come before.

In some garret somewhere in the world, there seemed always to be some paint-splattered personage, with a catchy didactic ready to be flung, knife-like, at their betters and a band of followers eager to man the barricades.

The result is that art is no longer a spectator sport. The rebellions have come so continually and spun so fast that we are all now our own Che Guevaras with the merchandise to match. With our smartphones at the ready, we’re Andy Warhol, Jeff Koons and each and every one of the Kardashians in one underwhelming multi-media package.

Power to the people. And even if we have no traditional tangible talent, point and shoot, upload to Facebook or Instagram and, as the likes and comments swamp us with the toasty satisfaction that comes from the approval of complete strangers, we become not only the artist but the art itself.

And so we arrive at the 14th Factory, which has recently completed its run in Los Angeles. The organisers call it a “monumental, multiple-media, socially-engaged art installation” as well as the “largest experiential art project” the city has ever seen.

And, in a city that can lay claim to inspiring more social media than most, the crowds came, saw, recorded and uploaded in record numbers.

Its home was an empty warehouse complex in Lincoln Heights, on the edge of downtown. Hong Kong-based artist, Simon Birch and 20 collaborators put on a show that perfectly exemplified art in the age of instant gratification. Utilising video, installation, sculpture, painting and performance, it was satisfyingly snappy and tactile in ways that traditional art galleries can never be.

The audience became complicit in the exhibits, smartphones poised, making sure every trout-pout, upwardly tilted face and angled body is immediately shared with their followers. Can’t do that with the Mona Lisa.

There is, of course, a word for all this. The “artselfie” was coined by art critic Brian Droitcour in 2012. It is, he has said, part of the “…aestheticisation of everyday life in social media that has leeched the authority of image-making from mass media and from art”.

But is an art gallery that celebrates the artselfie really art? Who knows. And, really, who cares, when it looks as good as it does and provides so many self-interacting opportunities. 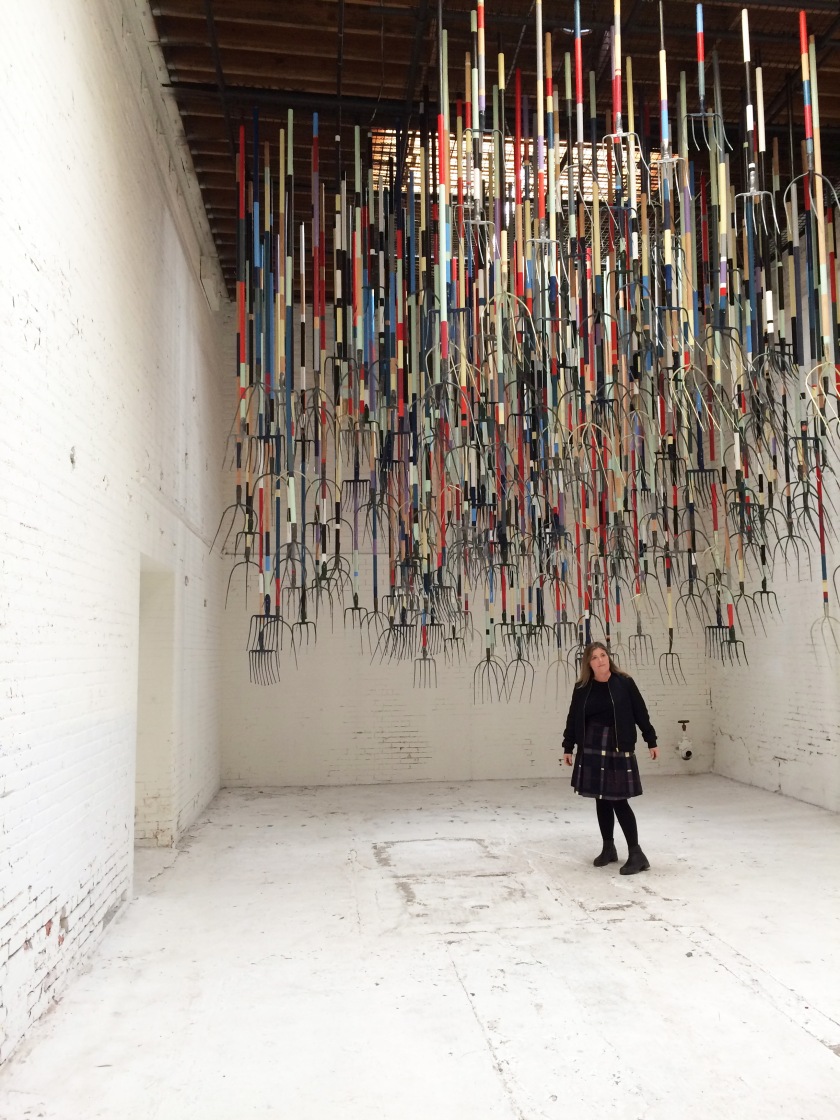 A room with 300 pitchforks hanging from the ceiling has a line of onlookers waiting patiently to take their own artselfies underneath. A reflecting pool in an outdoor courtyard contains dozens of salvaged airplane tail sections. The queue starts over there. A video installation showing, across multiple screens, a red Ferrari in a slow-motion car crash, with the adjoining room presenting smalls pieces of wreckage on a long table. Best you come back later.

And, at least to my undiscerning eye, the best of the lot. A full-size recreation of the eerily-lit Empire-inspired bedroom from 2001: A Space Odyssey (at a point in the film when the astronaut Bowman appears as old man before transforming into the Star Child). Masterminded by Birch and architect Paul Kember, it’s a major hit with the crowd and full points to the organisers who limit only a few visitors into the room at any one time. Instagrammers and Snapchatters swooned with delight. 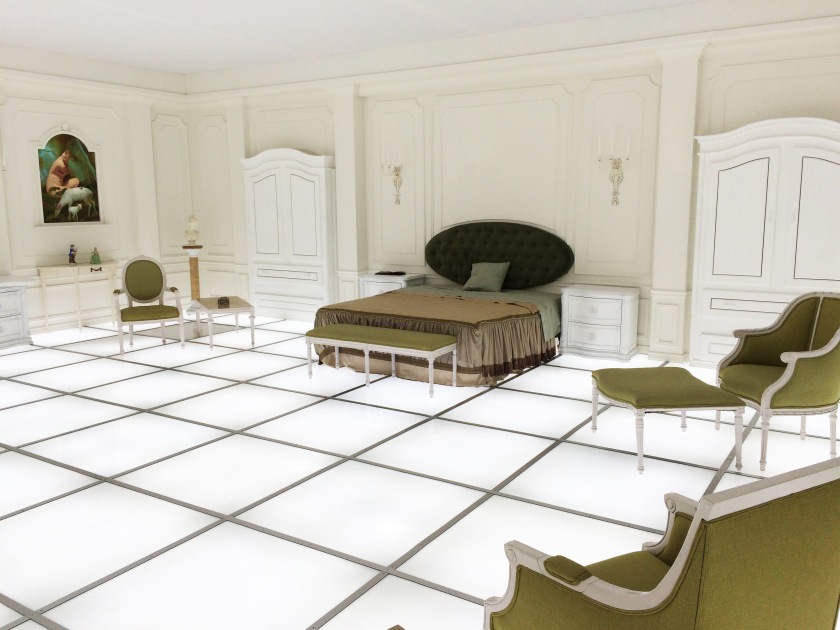 Of course, the inevitable had to happen. In mid-July, a woman taking selfies accidently demolished one of the exhibits, causing an estimated $US200,000. Simon Birch, contacted in Hong Kong, was philosophical (though most likely delighted with the world-wide publicity which, invariably, led to claims the incident was staged). Any publicity, in the age of Insta-art, is good publicity.

So while there may be some who decry today’s “technically impoverished” artists, you can’t help but feel Simon Birch and 14th Factory have given the public exactly what they want. And what these precocious times need the most. In an ironic post-modern kinda way. 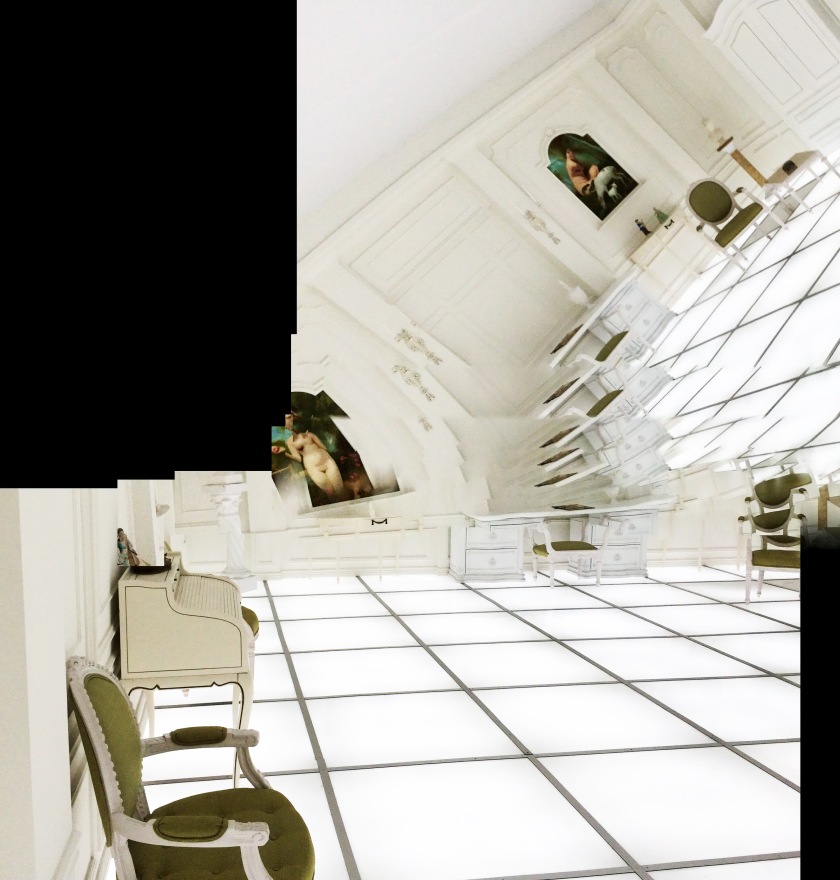 3 thoughts on “The Art Of Becoming Part Of The Art: Los Angeles’ 14th Factory and Art In the Age Of The Kardashians.”