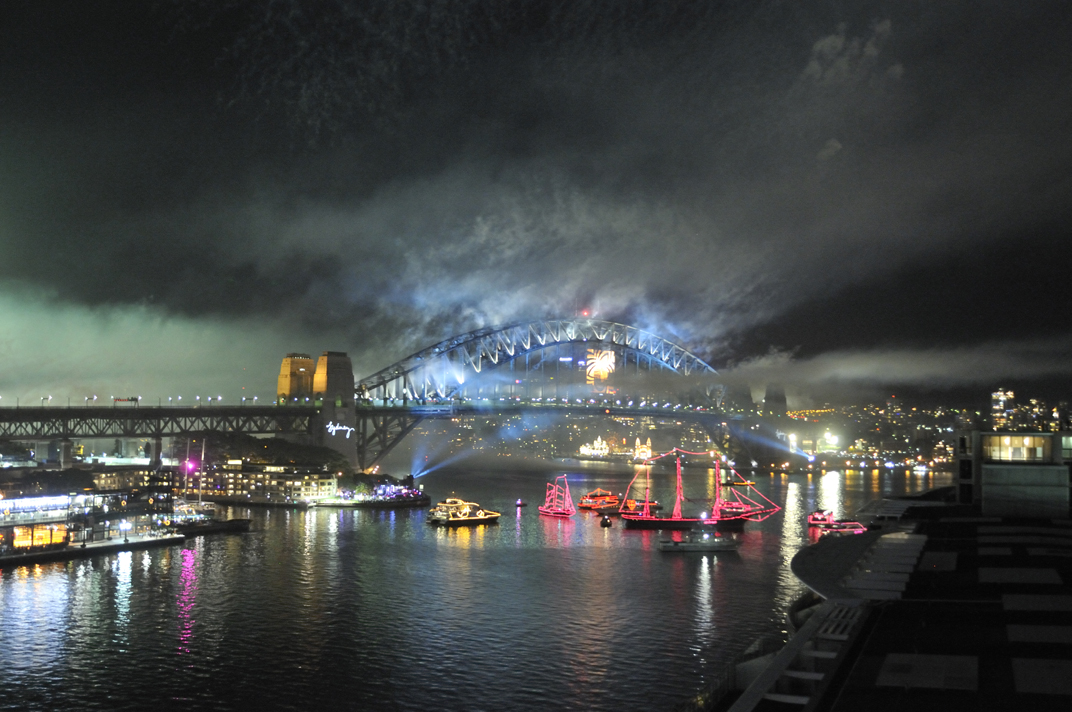 For once, I’ll be relatively succinct. I’ve spent a couple of New Year’s Eves shoulder-to-shoulder with the hordes cramming the shores of Sydney Harbour and vowed never to do it again. In 2012, it was a case of “never say never”.

It must be said there are many better uses for $5 million than sending it high into the air where it explodes noisily in bright colours. But nobody asks me. So each year, NYE dutifully rolls around and more than one million Sydneysiders and visitors stake out their places around the edges of the Harbour at first light and wait through the day for darkness to fall and the bread and circuses to begin.

There are two rounds of fireworks – at 9pm, ostensibly for families, and midnight. Seven fireworks barges are anchored along the harbor with other pyrotechnic units on the Sydney Harbour Bridge and several office buildings at Circular Quay.

For the more sensible, the television coverage, beamed around the world, offers a distinctly better vantage point. What it lacks is the sweaty, crowded, intoxicating bonhomie of sharing the moment with countless others, oohing and aahing as the explosions rattle the bones and the night sky is stitched with light. They probably said the same thing about the Western Front.

The A-listers party at the Sydney Opera House, amongst celebrities, politicians and the beautiful and connected. At Mrs Macquarie’s Chair and the Botanic Gardens, a canapés’ throw away, ordinary folk do exactly the same thing but without the French champagne or, in fact, any alcohol of any kind.

The police had closed off Circular Quay and The Rocks by early afternoon, when it was deemed to have reached capacity, and BYO alcohol was not allowed in although hotels, restaurants and numerous food stalls were operating.

While Northern Hemisphere celebrations can be distinctly frosty, in Australia – if the weather is right – it’s balmy and still. NYE 2012 was just such a night. It had been a hot sunny day, a showpiece of summer, and by 9pm it was still about 21 degrees Celcius.

I would never have entertained the thought of doing it again except for a friend’s kind invitation to spend it on the 15th floor of her mother’s East Circular Quay apartment, which as can be seen from the accompanying photographs had spectacular views from the CBD and Circular Quay to the Bridge and up the Harbour as far as South Head.

Traversing the police road closures was quick and highly efficient and an official pass allowed a picnic basket crammed with champagne to proceed unmolested. Travel into the city was easy by train; and out again just as painless. It was the perfect demonstration of crowd control, how to disperse countless thousands of people quickly and without drama. Police, check-point security, public transport workers, everybody that could have been pissed off that they had to work such a major public holiday weren’t and those who could be expected to have attitude didn’t. At least as far as I could see, NYE in the Sydney CBD was one big love-in, brimming over with good humour and respect.

Sometimes, human nature can be a surprising thing. Consider the magnitude and you have the makings of a very special event.