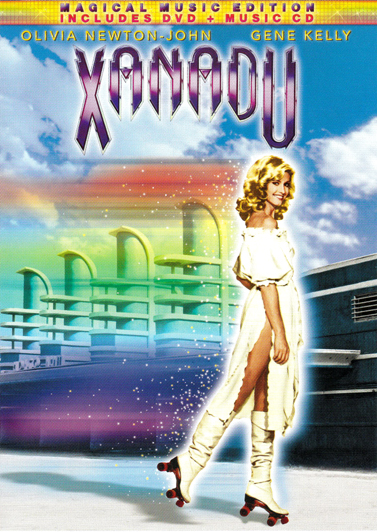 I know of fervent movie fans who play out elaborate rituals before their favourite films. Prom dresses and pigs’ blood for Carrie, chain smoking in the shower and Benzedrine for All That Jazz. And don’t even think about Single White Female.

Xanadu (1980) is one of those movies that never quite achieved its full potential, a coulda’ been shoulda’ been masterpiece, a disappointing sum of numerous wonderfully satisfying parts. It’s a musical that is the glittering wrapping around a grand love story set against a 70s roller disco backdrop.

The best way to fully appreciate this criminally under-rated slice of movie magic is to dress the part: leg warmers and roller skates, the old style not the in-line, and something acrylic and flowing. Natural fibres just won’t give you the same feeling.

Roll up the flokati rug to expose the bare boards. A large unencumbered viewing space is a necessity especially for the final, glorious dance scene when you must skate with your arms stretched above you, wrists crossed, lycra-sheathed hips bumping out the sensuous disco beat, your entire body held straight and proud. Beware of small, enclosed spaces. There’s nothing so humiliating than being in the midst of a major dance number and sprawling across a nest of coffee tables.

The beating heart of Xanadu is Australia’s darling, Olivia Newton-John, known proudly throughout the length and breadth of that great brown land as Our Livvy. Australia has always adhered to a carefully-qualified paraphrasing of the “give me your tired, your poor, your huddled masses” ethos except in this case it’s more akin to “give me your Grammy-winning, Golden Globe-grabbing, Oscar-adorating, million-seller masses from across the oceans and we’ll make them our own”.

Thus, Our Livvy was born in England but, more importantly for our celebrity-embracing culture, settled in Australia with her family at the age of five. The roll call of Australia’s adopted entertainers include Andy Gibb and the Bee Gees (born in England); AC/DC (England and Scotland); The Easybeats (England, Scotland and the Netherlands); Jimmy Barnes and John Paul Young (Scotland); Split Enz, Crowded House, Dragon and Russell Crowe (New Zealand), and Nicole Kidman and Mel Gibson (United States). The best Australia can rightfully claim as their own is one half of Air Supply.

Through the 70s, Olivia Newton-John was a recording sensation, topping the charts worldwide with such hits as If Not For You, Banks Of The Ohio and I Honestly Love You before breaking into the movie big-time with her stellar turn as the squeaky-clean good girl out to snare bad boy John Travolta in Grease (1978).

The hits continued and it seemed as if she could do no wrong. She was attached to Xanadu before there was even a script, not that one actually appeared until well into the shooting schedule.

Our Livvy is cast as Terpsichore, one of the daughters of Zeus and a muse, a goddess who inspires creativity in mortals. In modern day Los Angeles is artist Sonny Malone (Michael Beck), who earns his living from turning record covers into giant advertising murals and fears he will never find his true creative calling.

“Sometimes I see more in the covers than what is really there,” he says tellingly; deep inside, he knows that in the right circumstances he could be the da Vinci of promotional painting. But he anguishes over his craft. “Guys like me shouldn’t dream anyway.”

As an aside, this seques beautifully with a comment I overhead recently at a TEDx conference where two trend spotters were discussing Xanadu. One said: “At its core, Xanadu seeks to examine the deepening chasm between continental and analytic philosophy up to and including Hegel, the emphasis on metaphilosophy on one hand and its repudiation by the continentals and the development of the logical positivist approach on the other; in particular, and it’s a question Wittgenstein agonised over until late in his career, should leg warmers ever really be paired with lycra?”

At the lowest point in Sonny’s artistic journey, Terpsichore and her eight muse sisters spring from a wall on the Venice boardwalk. In a flowing white peasant dress with ribbons decorating her blonde hair, she decides it more prudent to disguise herself lest she be confused with the numerous other muses already flooding Los Angeles and adopts the name Kira.

She straps on a pair of roller skates, leaving her sisters behind to dance to a rock-symphonic Electric Light Orchestra number in an alley and goes in search of Sonny. Her virginal beauty, thick Australian accent and habit of answering questions with more questions while skating in circles, beguiles and inspires Sonny.

Later, Sonny meets up with a clarinet player, Danny Maguire (Gene Kelly). Danny was a featured player in Glenn Miller’s big band in the 1940s but gave up music after loving and losing the girl of his dreams (a dance sequence between Our Livvy and Gene Kelly reveals that girl to be Kira only he doesn’t appear to recognise her; time and bedevilling disappointment has coloured his memories to a fetching shade of Alzheimer’s).

Sonny and Danny set out to find a venue in which to open a disco. Kira magically leads Sonny to the cavernous Pan Pacific Auditorium, a real-life Art Deco landmark located in the Fairfax district near Farmers Market. (It burnt down in 1989, something of a metaphor for the film itself.)

While debating a name for their new club, Kira suggests Xanadu, which implies either she was also a muse to Coleridge or that the lending library on Mount Olympus is unusually comprehensive. When Sonny declares his eternal love for Kira, she discloses her true identity and says they can never be together.

Skating the gravel-pocked pavement of true love, Kira and Sonny fall desperately in love; he travels to the alleyway mural at Venice Beach and leaps through into Mount Olympus which looks like a cross between an empty stage set and Tron, where he implores Zeus for Kira’s hand.

It looks like his quest will be in vain. He returns to the real world in time for Xanadu’s opening where Danny, Sonny and Kira skate in circles for the final dance number leading a cast of hundreds of colourfully-dressed guests; it’s an explosion of satin shorts, feathered hairstyles, lycra, jersey dresses, body shirts, undulating hips, and leg warmers.

Just when all seems hopeless with Danny broken-hearted amidst the celebrations, a waitress who bears a startling resemblance to Kira brings him a drink. Double-take on Sonny’s part and fade out.

On release, the movie bombed badly; one magazine reviewed it with the unnecessarily harsh:  “In a word – Xana-don’t”. The soundtrack, however, with such numbers as Xanadu, Magic and Suddenly, with writing credits split between ELO and long-time Livvy collaborator, John Farrar, charted well.

It’s difficult to know exactly where it went wrong. Our Livvy and Gene Kelly were absolute delights. Michael Beck, with an acting style as wooden as Pinocchio, much less so, although he’d just come off the cult hit, The Warriors (1979), and was considered a hot property. Beck’s passing resemblance to singer Andy Gibb has since created some confusion and many still think it’s Our Livvy and Andy Gibb together in Xanadu; the combination is certainly worth entertaining.

There were also reports from the set that the script was constantly being rewritten throughout production; by the time shooting wrapped, there were six different versions of the script.

Overall, though, Xanadu remains a delight, even if it’s somewhat of a guilty pleasure. It is one of the most comprehensively satisfying movies of the disco genre, just slightly above  Can’t Stop The Music (and that’s saying something, although I’m not quite sure what) and Thank God It’s Friday.

With so many fans and so much timeless attention lavished on this paean to love and artistic inspiration, Olivia Newton-John and roller disco, Xanadu will remain a muse to all its fans.