NOTE: This is Part I of the Garden Palace article.

The Garden Palace, the most magnificent building Sydney has ever seen, is virtually unknown these days, the province of history buffs and architecture junkies. It doesn’t help that it existed for just three years; in September 2012, it will be the 130th anniversary of its spectacular destruction.

There are a few reminders of its existence if the curious have the time to search the Royal Botanic Gardens but none befits its outstanding splendour and the way it dominated the skyline of the colonial city.

It was a grand Victorian-era confection, an ambitious vision that was hampered by haste, and it was this rush to complete it in time to house the Sydney International Exhibition of 1879 that led directly to its untimely demise. Yet, when it opened in September 1879, it excited the awe of the people of New South Wales and the envy of the other colonies. It was a big, bold statement of self-importance especially befitting the colony’s hopes and dreams.

Ever since the Great Exhibition of 1851, held at London’s glittery Crystal Palace, there was a race to mount ever bigger, ever better testaments to technological achievement. New South Wales had sent contributions to the Great Exhibition as well as to subsequent events in 1862 and 1873; to Paris in 1855, 1867 and 1878; and to the biggest of them all, the 1876 Great International Exhibition of America in Philadelphia, that brought together 60,000 exhibitors from 37 countries. All were forerunners of the World’s Fairs and Expos of the 20th century.

The Agricultural Society of New South Wales, founded in 1822, had mounted the much more modest Intercolonial Exhibition in 1870, the centenary of the discovery of Australia, at exhibition buildings located within Prince Alfred Park. As the years wore on, there was agreement that the time was right for New South Wales, as the oldest of the Australian colonies, to make a declaration of its industrial maturity and to be the first in the Southern Hemisphere to do so.

The Society decided on a date in September 1879 to hold a Sydney International Exhibition. Invitations to attend and exhibit were sent out to governments around the world. The response was almost immediate and plans were hastily arranged to extend the exhibition halls of Prince Alfred Park.

The torrent of interest, however, became a deluge that turned into a flood of Noah-like proportions. By late 1878, the Society realised that the Sydney International Exhibition was destined to be bigger than anybody could have imagined. They, and the environs of the Park, just weren’t up to the challenge.

An approach was made to the New South Wales Government to take over the event. Sensing the humiliation to the colony should the Exhibition be cancelled, Henry Parkes, then Colonial Secretary, agreed. In December 1878, nine months before the scheduled opening, it became official.

The rush was on. James Barnet, who had held the post of Colonial Architect since 1865 and whose greatest works would include the Sydney GPO and the Customs House as well as public buildings throughout New South Wales, turned to designing a building big enough and grand enough for the Exhibition. A suitable location would also have to be found.

Formal instructions authorising Barnet were issued on Tuesday 17 December. On the Friday, he submitted a design, which he estimated would cost £50,000 (the eventual cost would blow out to just under £200,000). A prime spot running alongside Macquarie Street and adjoining the Botanic Gardens and the Doman was earmarked. On a high ridge, it was intended that the exhibition building would dominate the city’s skyline and be seen for miles in any direction.

The first controversy of the Garden Palace’s existence erupted even before the first stone had been laid. That the building was going to be big was beyond question; to hold the anticipated exhibitors, floor space was to equal 8.5 acres (3.4 hecatres) and the entire exhibition grounds would spread across 35 acres (14 hectares).

Barnet’s building was, befitting a temple of technological achievement, shaped very much like a church. It had a nave 800 feet (244 metres) long with intersecting transepts 500 feet (152 metres) in length with concluding four storey-high entrance towers. It would be topped by a giant dome 100 feet (30 metres) in diameter (only slightly smaller than St Paul’s Cathedral in London), topped by a lantern for the flow of natural light and an ornamental finial. From the ground to the tip of the finial, the Garden Palace would reach a height of 210 feet (64 metres).

There was a public outcry, fuelled by the newspapers of the period, about such an enormous building dominating a public area. Not the least concerned were the wealthy homeowners along Macquarie Street who were outraged that their expansive harbour views would be endangered.

The site of the Garden Palace was marked out on 2 January 1879, two days before Barnet’s plans were formally approved. By 13 January, construction commenced. By May, more than 3,000 workers were feverishly attempting to meet the looming deadline. The use of carbon-arc floodlights, marking the first use of electric light in the colony, allowed night shifts to accelerate progress.

The factors that hastened the demise of the Garden Palace were beginning to become apparent even at this early stage. With such a pressing deadline, there was no time to use more permanent (and fire-retardant) materials; aside from the brick used in the foundations and the entrance towers, the majority of this vastly enormous building was wood and corrugated iron.

(In comparison, the World Heritage-listed Melbourne Exhibition Building – constructed for the Melbourne International Exhibition of 1880 – was composed primarily of brick and bluestone.)

Thus, the Garden Palace, that most magnificent of constructions in the harbourside city, became impermanence exemplified.

Luckily, everything ran to plan. On Wednesday 17 September 1879, the Sydney International Exhibition had its official opening with some 20,000 people attending. The stormy weather of previous days cleared to bright sunshine; a public holiday had been declared and all shops and businesses were closed. 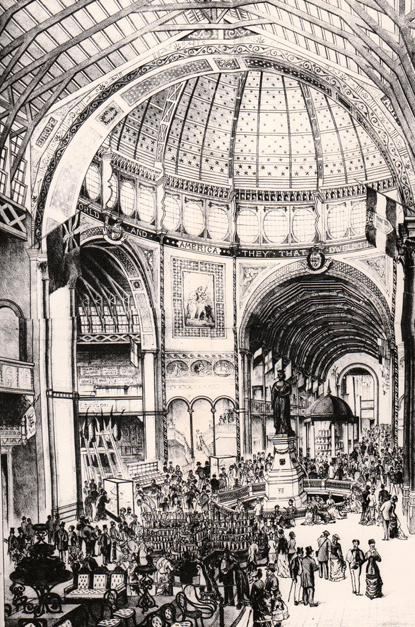 In total, there were 2,160 foreign exhibitors as well as representation from all Australian colonies. Some 14,000 exhibits crowded the Garden Palace alone; visitors were particularly fascinated by new-fangled inventions. The first elevator ever seen in Australia, with a luxurious interior of paneled ash, carpets and seats, was an instant hit. Another marvel was a machine operated by a 13-year-old girl which washed filthy clothes borrowed from the engineers’ shed to a sparkling white.

The Exhibition was a roaring success. By the time it officially closed, on 20 April 1880, more than one million people had passed through the gates (in a country with a population barely exceeding 2.2 million).

New South Wales had done itself proud. As one newspaper commented, the Sydney International Exhibition had “exalted the colony is the estimation of all civilized countries”.

Once the final visitor had left, the brightly coloured ribbon and bunting removed and the last exhibit crated up and shipped away, there remained another problem. Just what to do with the Garden Palace?

But that, along with the tragic story of the Garden Palace’s final hours, will have to wait for another day.