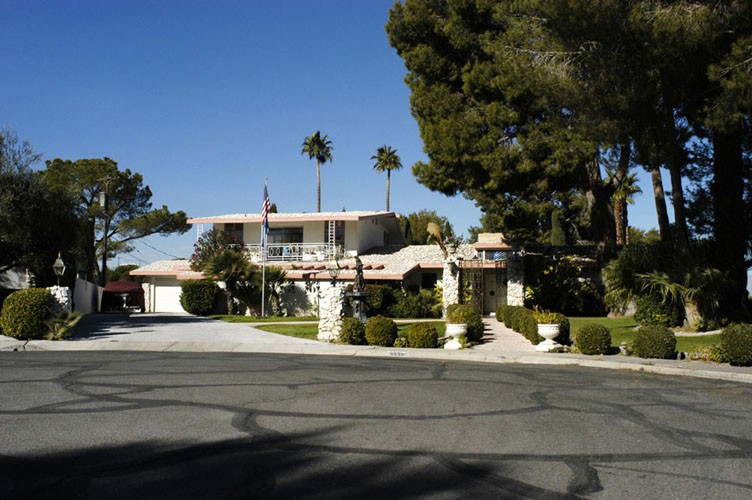 NOTE: When this first appeared in 2011, the location of the Casino house was a bit of a mystery. Now, it’s all over the Internet. This piece has been amended and expanded in June 2014 to reflect this.

Sometimes it pays to ask and, if you don’t get the answer you want, keep asking. Persistence pays off eventually. It just takes a little time.

I’m a big fan of Las Vegas, that glittering, gaudy and spiritually gluttonous mirage in the Nevada desert. I especially love its history, the tangled path by which it travelled from being an illicit getaway in the middle of a sun-parched nowhere to one of the world’s most popular tourist destinations.

There’s something for everybody in Vegas: flashy ultra-luxurious resorts stand side-by-side with giant grandly tacky homages to ancient Egypt, King Arthur’s Court, classical Rome and the canals of Venice.

Unlike Los Angeles, where there’s more aspiring actors per square metre than anywhere else in the world, in Vegas everybody unashamedly wants to be rich and they have just about every way imaginable of making that happen. Most, of course, don’t and more shattered dreams lay congealing in the city’s neon glow than in a Nathanael West novel.

The archetypal Las Vegas movie is Casino, Martin Scorsese’s ultra-violent 1995 depiction of old-time Vegas starring Robert De Niro, Joe Pesci and Sharon Stone. The idea being that fiction sometimes has nothing on real life, Casino is based on the story of Frank Rosenthal, the professional gambler who institutionalised sports betting in 1970s Vegas and ran a few casinos for the Mob while he was at it. Robert De Niro plays Sam “Ace” Rothstein, a thinly-veiled Rosenthal.

I’d been trying for some time to locate the house on the edge of the golf course in which De Niro and Stone (as his wife, Ginger, based on Rosenthal’s wife, Geri McGee) lived. I’d initially contacted local journalists who specialised in Vegas history and ended up corresponding with author and Vegas buff, Steve Fischer, whose excellent book, When The Mob Ran Vegas: Stories of Money, Mayhem and Murder (Berkline Press, 2005) is required reading on the city’s lawless adolescence. Get it at Amazon. There’s also an audio version on iTunes.

I’d initially contacted Steve about an Australian showgirl, Felicia Atkins, the star of the Folies Bergere show at the Tropicana, Bugsy Siegel’s old casino, in the 50s and 60s. Felicia was Vegas royalty, centerfold of Playboy’s April 1958 edition and appeared with Jerry Lewis in The Errand Boy (1961) before retiring and moving back to Australia where her trail went cold. Other former showgirls who’d worked with Felicia reported that she’d returned to Vegas a few times for Folies Bergere reunions but none had contact addresses; seems she didn’t stay in contact with too many of her associates.

Then, purely by luck, I found her although it was very much a good news / bad news scenario. Yes, she was still alive, living in an aged care facility north of Newcastle, New South Wales. No, she was far removed from any attempt to recall her glory days as she was in an advanced stage of Alzheimer’s Disease and her memories had long since evaporated.

A staff member at the home recalled that, in the early days of her arrival, she’d shared her stories about being a Vegas showgirl but not too many people took her seriously. Felicia did, however, love teaching others to dance. The cruel reality that is Alzheimer’s has robbed us of first-hand recollections of those heady days.

Anyway, back to the Casino house. Steve Fischer thought the Casino house was located on the 17th hole of the Desert Inn Golf Course and had been demolished to make way for Steve Wynn’s $US2.7 billion Wynn Las Vegas development. In trying to verify that, a very helpful soul at the Nevada Film Office confided that the house was still very much in existence, a little further east on the edge of the Las Vegas National Golf Course.

The National started life in 1961 as the golf course for the Stardust Casino, in 1969 was renamed the Sahara-Nevada Country Club, changed its name to the Las Vegas Hilton Country Club in 1994 and four years later acquired its current designation . These days, the National’s website mentions the Casino house but, when I was looking, it took a fair bit of detective work. So, armed with the film office’s clues, I started driving around the housing development hugging the golf course.

Happily, I found the house quite easily and it looks almost exactly as it did when Scorsese filmed there. If anybody is interested in paying a visit, the address is 3515 Cochise Lane.

I’m sure the owners are pretty weary of tourists snapping their property and I’d advise against knocking on their door and requesting a guided tour of the walk-in wardrobe. But they live in a little piece of movie history and, hopefully, they’re understanding about it.

Since then, I’ve learnt that the Casino house is a cherry on a far larger slice of old-time Vegas history. The golf course and the huge surrounding residential area was built at the same time and named Paradise Palms. The task of creating a homogenous design character to the development was given to the architectural firm of Dan Palmer and William Krisel, which already had mileage in that other time-capsule of mid-century modern architecture, Palm Springs.

(As an aside, it’s worth noting that one of Krisel’s Palm Springs designs is perhaps the most famous of all the city’s mid-mod houses, the one where Elvis and Priscilla Presley stayed on their honeymoon. It features on every Palm Springs bus tour.)

It was a planned community in that buyers had to choose between certain Palmer & Krisel designs, although numerous variations (in such areas as roof line, decorative finishes, allowing the homes to be rotated at different angles, even having Hawaiian influences as options on some models), allowed individual expression.

Entertainers, casino executives and, inevitably, more than a few “made men”, the people who fed the furnace of Las Vegas, called Paradise Palms home. Some of the casinos also kept homes there for visiting entertainers. Amongst the Palm’s more famous residents over the years have been Bobby Darin, Phyllis Diller, Debbie Reynolds, Dionne Warwick, Juliet Prowse, Max Baer Jr (Jethro on The Beverly Hillbillies) and lounge music pioneer Esquivel.

It should come as no surprise that even Frank Rosenthal himself lived there (although not in the house where Casino filmed). And, on a personal note, I’m extremely pleased to report that Frederic Apcar, the producer of the long-running Casino de Paris show at The Dunes (and whose 1963 Cadillac Coupe de Ville I own – see http://www.davidlatta.org/2011/08/29/a-classic-link-to-old-time-las-vegas-the-dunes-frederic-apcar-and-the-casino-de-paris/ ) was also a resident.

Drive the streets of Paradise Palms and you’ll find a haven of low, long mid-mod homes. There was a time, when the mobsters’ reign ended and Vegas went legit (or gave every appearance of such), morphed into Disneyland and went all out to attract families, that Paradise Palms went into decline. Without regular maintenance, the built environment doesn’t survive long in the harsh desert conditions and these beautiful homes cracked, split, warped, leaked, fell apart.

The erosion would have continued had mid-century aesthetics not become so fashionable in recent times. Now, bit by bit, the tide has turned. New residents with a respect for the past have moved in and restored these wonderful homes back to their former glory.

Paradise Palms has its own website – http://www.paradisepalmslasvegas.com – and Facebook page, while a host of other retro-obsessed sites breathlessly report on PP’s latest developments. The like-minded new arrivals socialize together and spread the gospel: remember, respect, retain.

When, like Felicia Atkins, the real thing is way beyond our reach, it’s still possible to visit a time when style was supreme. The residents of Paradise Palms have it better than most. They can live their dreams in ways most of us can only imagine.

For further retro and old-time Las Vegas info, go to:

Words ©2014 David Latta. May not be copied or republished in any form without permission.

6 thoughts on “Hitting The Jackpot At The Casino House: A Mid-Mod Community’s Links With Old-Time Las Vegas”