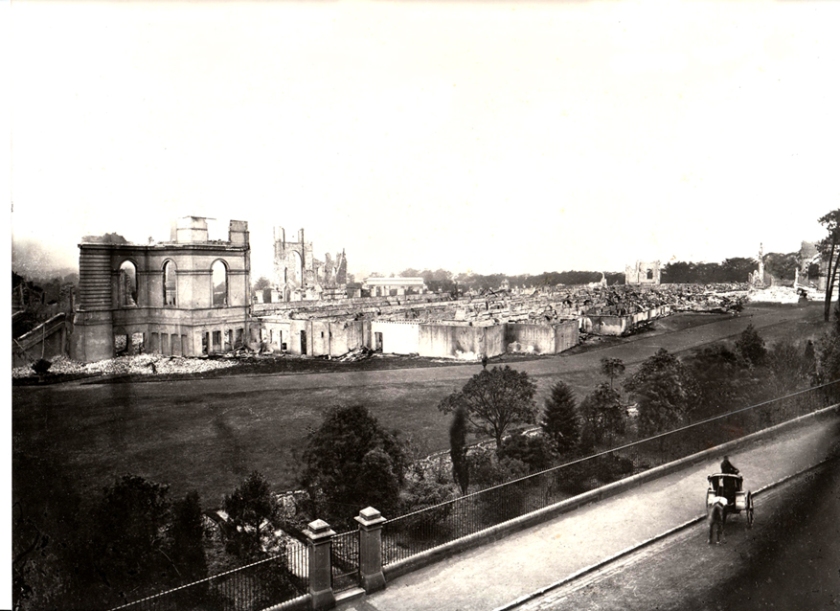 NOTE: This is Part II of the Garden Palace article.

When the Sydney International Exhibition closed in April 1880, thoughts turned to how best to utilise such a magnificent building. The newspapers of the period weighed in with a range of fanciful possibilities including turning the basement area, under the towering statue of Queen Victoria, into the world’s largest aquarium.

Public sentiment seemed to lean towards a museum. It was announced, not too long after the Exhibition, that the Garden Palace would house the South Kensington Museum of New South Wales. Whether this was an official arrangement with the London museum founded in 1852 and drawing upon exhibits purchased from the Great Exhibition at the Crystal Palace (and which was renamed the Victoria & Albert Museum in the 1980s) or merely a nod towards the Mother Country, is not known as the plan never reached fulfillment.

However, another museum did occupy some of the space with the Technological and Sanitary Museum taking up space around the ground floor area of the west nave. In the end, political practicality took over. The machinery of colonial government required enormous space and the vast interior of the Garden Palace was perfect for such uses.

The Mines Department, the Harbours and Rivers Department and the Trial Survey Branch were just a few of the many government departments and instrumentalities that set up supplementary offices, storerooms or archives within the Garden Palace.

The Sydney International Exhibition eventually faded into memory and the Garden Palace became an accepted part of the Sydney skyline. Nobody gave much thought to how long the locals would be able to enjoy such a beautiful building. The answer, regrettably, was not that long.

On the morning of 22 September 1882, night watchman F. Kirchen of the Insurance Brigade made his rounds as usual and found nothing of consequence. He met up with the police patrol that regularly visited the building at 5.30am and then walked to the Domain entrance to greet the day watchman, J. McKnight. They chatted for a few minutes as dawn started to seep across the harbour.

Turning their attention to the Garden Palace, they were horrified to notice smoke curling from under the dome. Kirchen and McKnight rushed to the building. It was already too late. They entered the building and saw, through the choking dark smoke, enormous tongues of flame rushing up from the basement area, engulfing the statue of Queen Victoria, and being propelled with increasing speed along the dry wooden beams and supports towards the massive dome.

They had enough time to reach a telephone and alert the Fire Brigade before they fled the scorching heat. After a moment’s hesitation, there was barely time to rescue a pet dog, trapped and barking in panic.

By the time they’d reached a safe distance, the Garden Palace was a roaring ball of flame. As the Sydney Morning Herald later commented, “To describe the progress of the fire is to analyse the events of a few minutes”.

Fire brigades started to arrive from all parts of the city, as did horrified local residents. They could do nothing but watch in stunned disbelief. A few minutes after 6am, the windows of houses fronting Macquarie Street started to crack.

Strong winds fanned the fire which burst in a multitude of colours – dark ruby, green, yellow and blue, tinged by the chemicals and paint treating the wood and the contents of the building –  higher skyward. When the dome collapsed, the rush of expelled supercharged heat sent ash, debris and burning cinders as far afield as Darling Point. The roof of a house in Potts Point was set alight while furnace-twisted sheets of corrugated iron rained down on the grounds of Elizabeth Bay House.

The Illustrated Sydney News reported: “A dull roaring sound, and a crackling like the discharge of fire-arms. An immense flame leapt into the sky, volumes of black smoke rolled up, and with a crash like a peal of thunder the mighty dome fell in”.

By 9am, the spectacle was over. The Garden Palace, which for three years, was the first sight of the city skyline seen by ships entering Sydney Heads, was no more. All that remained were a few tottering fragments of the entrance towers, the charred brick foundations and a smouldering pile of rubble that took days to extinguish.

Just about everything within the building was destroyed including hundreds of paintings gathered for the Art Society of New South Wales’ annual exhibition, all documents relating to the 1881 census as well as other important census records going back decades, and land and water calculations that required vast sections of the colony to be re-surveyed.

Attempts to find a cause of the fire proved fruitless. One suggestion was that thieves set the fire while attempting to break into a Mines Department safe. Another was that one of the Macquarie Street landowners had been desperate enough to regain his harbour views that he had resorted to arson.

The sad truth is that fires were a regular occurrence in Victorian times and the haste with which the Garden Palace was constructed, with the Government taking control of the Exhibition’s organisation just eight months before the projected opening, necessitating the use of wood rather than brick and stone, played its part.

It was just one of those things and it robbed Sydney of the most beautiful building that had ever graced its shores.

Today, there’s very little to remind visitors that it ever existed. The Garden Palace Gates, erected in 1889 opposite the State Library (what is now the Mitchell Library), were later relocated to their present site fronting Macquarie Street. The Pioneers’ Memorial Garden was built in 1938 on the spot where Queen Victoria’s statue stood. A small brass plaque commemorates the Garden Palace.

One lasting tribute, although even that is generally known only by trivia buffs, is that the Technological and Sanitary Museum survived the fire despite losing all its exhibits, found safer lodgings and was later renamed the Museum of Applied Arts and Sciences. Later still, it became the Powerhouse Museum and can now be found in Ultimo adjoining Darling Harbour.

One thought on “Sydney’s Forgotten Glory – The Garden Palace Burns!”